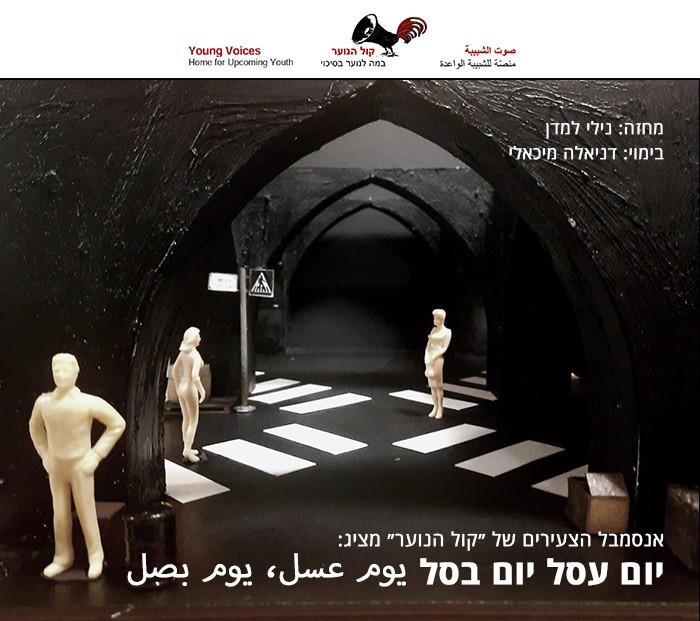 A friendship between two women is born. Between Saida, an Arab onion merchant from Sheikh Jarah, and Rivkah, an Orthodox Jew from Beit Israel. Will this friendship endure the test of time? Will their need for connection weather the forces of tradition? A random encounter in Jerusalem, that is where the seed was planted.

“Young Voices” has been operating in Jaffa since 2014. Its working model is social welfare through Theatre. It’s a 3-year program, during which underserved Jewish, Arab, new-immigrants and migrant- workers’ youth meet and study theatre skills. Through these theatre-simulative tools, they explore sensitive issues of identity, racism, and social isolation and acquire the social skills so necessary for them. All participants enjoy a warm meal, for some, the only one that day.
The Ensemble is a group of alumni, who are over 18 years old. The Ensemble allows them to pursue further their passion and get paid. The shows, many they co-write, deal with life as they experience it, and are shown in theatres and halls, as well as schools and campuses.
But most of all, it is a way for them to mature while supported by a diverse, warm family and find their place in society.

Daniella Michaeli is an Israeli director , choreographer and actress. She served as the artistic director of the woman Festival in Holon, the International Children’s Theatre Festival in Haifa and the Acco Festival of Alternative Israeli Theatre . She is a member of the Lottery Council for Culture and Art in the field of performing arts and literature, and a member of the artistic management of “Theatroneto”- one person show Festival.

Nili Lamdan – playwright. Nili is an entrepreneur that focused on the crossroads of art and urbanism in Tel-Aviv . She is the CEO of the Avni Art institute. Beforehand, she served as a community emissary to Milwaukee, WI . Lives with her family in Jaffa.

Revital Moneta – Musical Director Musician. composer, singer-songwriter for more than 4 decades. Conductor of vocal groups and a singer in a Capella group.