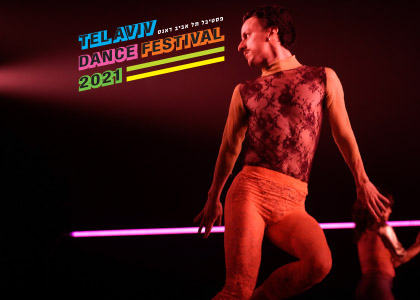 Absert by Talia Beck
A study on Anger

What We Are Not; Dawn of the Desiring-Machines.  A Queer Science-Fiction-Spectacle by Uri Shafir
In days of global pandemic, domestic warfare, and fragile reality that seems to change in the blink of an eye, Uri Shafir and his dancers seek to exercise the dance performance as a remedy, or a curse, and turn the theatre into a space that celebrates instability and absurdity, clinging onto pleasure, escaping common sense, common ground, and the common body.

“We do not wish to tell you a story, but to practice our very existence in the world — a world in catastrophe, a world in repression, that dares to demand from us narratives of stability, unity, linearity. We try to practice what our dancing body has always known – that we have never been whole, and our survival plan has never been stable. We navigate the map of changes that are taking place in us, in the multiplicity of our identities – what we are, and what we are not, real and fictitious, organic and synthetic, and seek nothing but to relish a little more in the fantasy we may win”

First things 1st by Michael Getman
Imagine it.
A world where there is no distance between it and our knowledge of it.
How then to speak about it.
When the foundations of society are undermined, and spaces of existence are reduced.
Perhaps we are left to be entirely focused on tuning ourselves inward, as one tunes an instrument to achieve precision.

First things 1st is the first chapter out of five stances. In this iteration, Getman uses words and peaks between what is being said and what is said between the lines. Matter, form, action, object and representation, commandment and request, nothingness and Nothing. Brick by brick, a personal attempt to touch the humane –  a visible trap.

Talia Beck is an independent Dancer and Choreographer. Among her works: “Saudade” “Ma’atzama” “The Botany of Desire” “W” “Colonia” and “Esters.” The work was produced by and for Machol Shalem and was premiered as part of the Jerusalem Dance Week 2020 at HaParsa Center for Performing Arts.

Uri Shafir is a dancer, choreographer and a performance artist. Uri’s works can be situated in the threshold between choreography and performance, and usually explore the notion of Liveness in live performance, while reflecting upon the act of performing through choreographed and un-choreographed movement, through different relationships and constructions with the audience, the performers, and the performance itself. Uri’s work has appeared in Curtain Up, Zirat Machol, International Exposure, Diver Festival (IL), L1DanceFest (HU), Tanec Praha (CZ), Lucky Trimmer (DE), Dance Waves (CY), Antistatic (BG), Out Of Israel (USA), and more. As a dancer he has worked with Ensemble Batsheva, Yasmeen Godder, Niv Sheinfeld & Oren Laor, Dana Ruttenberg, Maya Levy & Anando Mars, Guy Gutman, and more. Uri is a graduate of MASPA (Kibbutz Ga'aton Dance Workshop) and Kelim Choreography Center (Israel). Uri is an alumni of the MA choreography studies in Montpellier France, in the MASTER EXERCE program, at ICI-CCN, (artistic director – Christian Rizzo). Uri is a Gaga teacher and leads Gaga workshops around the globe.
The work was premiered online in Curtain Up Festival 2020, and was supported with the assistance of the Israeli ministry of culture, Mifal Hapais Council for the Culture and Arts, the Yehoshua Rabinovich Tel Aviv Foundation for the Arts, and by Yasmeen Godder Studio as part of a Resident Artist Program.

Michael Getman is a choreographer and performer born in Israel to Russian/Jewish parents Dora Karolin and Zachariah Getman. Upon completion of his professional training at the Bat Dor under the direction of Mrs. Janet Ordman, he was invited to join the Batsheva Ensemble under the direction of Naomi Perlov and then danced in the Batsheva Ensemble under the artistic direction of Ohad Naharin. He then joined the Pretty Ugly Ballet Freiburg under the artistic direction of Amanda K Miller. He has worked with and interpreted works by choreographers including Ohad Naharin, Amanda K. Miller, Marguerite Donlon, Orjan Andersson, and William Forsythe. Michael examines and is curious about the relationship between our bodily actions, cognitive responses, subjective experiences, and the ability to respond to the ongoing demands of experience with a range of emotions. His works have been presented in various festivals and venues around the world. Michael expands his artistic search and research by collaborating with artists from the field of theatre, dance and the visual arts and currently working on his MA research at the University of Huddersfield, England.
The work is supported by Derrida Dance Centre, Bulgaria, and Mifal HaPais Council for the Culture and Arts, Israel.

The work was premiered online in Curtain Up Festival 2020, and was supported with the assistance of the Israeli ministry of culture, Mifal Hapais Council for the Culture and Arts, the Yehoshua Rabinovich Tel Aviv Foundation for the Arts, and by Yasmeen Godder Studio as part of a Resident Artist Program.