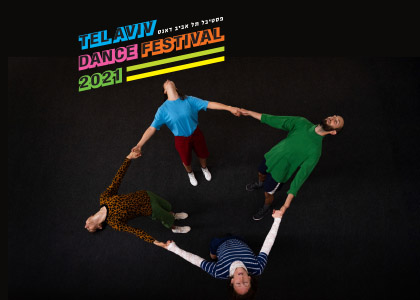 Chapters of Joy by Roni Chadash
Chapters of Joy is a piece for five dancers that celebrates the body in its vividness, vitality, and grace. Against the backdrop of Bach’s “English Suite no 3,” the dancers attempt to bring new life to the music, shaking off labels of luxury and classical stigmas. They adopt the structure of the suite and simultaneously disrupt its analytical, calculated, polite features. In a dance that is light, sweeping and dizzying, the performers indulge in their present being and share it with the audience – in a simple attempt to create intimacy.

Dawn by Rebecca Laufer and Mattheus van Rossum
Premiere
Dawn combines complex physical research and theatrical storytelling to create an immersive  dimension of space and time where two lost entities, victimized by circumstance, attempt to decode the world around them. In an exploration into the expanse of awareness, Rebecca and Mats let go of the wish to succeed and thrive in the beauty of failure. Trapped in unfamiliar bodies, in an unfamiliar setting and time, the two artists question how to adapt to survive.

Roni Chadash is an independent choreographer, performer and teacher. Roni is interested in deconstructing the form of dance as it is perceived. She does so by deconstructing the body – differentiating between body parts and finding extreme range, mobility and freedom in each one of them. Her works have received numerous awards for their originality, both in Israel and abroad including the Israel Ministry of Culture Award for Young Choreographers (2018) and Shades in Dance Award (2015).

Rebecca Lauter and Mattheus van Rossum are choreographers based in Israel. Rebecca Laufer is from the United States and received her Bachelor's degree from Point Park Conservatory in Pittsburgh. Mattheus van Rossum is from the Netherlands. He received his Bachelors at the Amsterdam School of Arts. Rebecca and Mattheus have been collaborating since 2015. Their work has been shown throughout Israel, Europe and the United States and has gained much praise. They have participated in numerous festivals and showcases. They both currently dance with Avshalom Pollak Dance Theater.

Chapters of Joy premiered as part of Curtain Up Festival 2020 under the direction of Oded Graf and Dana Ruttenberg.
It was created with the support of Bora Bora Residency Center, Mifal Hapais, Suzanne Dellal Centre’s Choreographers Circle, Clore Dance Center, Yad Harif Dance Center, and The Aquarium Project by Fresco.

Special thanks to the Avshalom Pollak Dance Theater for offering a space for our research and creativity.