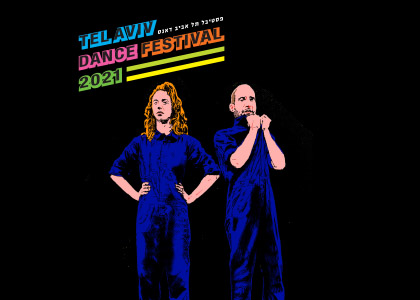 ART ATTACK is a celebration of dance, music, and inspiring texts from the 20th Century. New Wave and Post Punk pop music of the 80s expressed the cry of a generation in the midst of political, economic and cultural turmoil, while demonstrating how pop music can also be intellectually charged. Not surprisingly, quite a few musicians of that time were influenced by the great art manifestos of the 20th century, which served as a declaration of intent and a call for action. These manifestos were written throughout history by passionate artists in response to times of crisis and social instability, and for the purpose of presenting an alternative to the existing order. Niv and Oren return to these sources of inspiration to remind themselves and their audience that art has the power to move us, create meaning, and form a community.

You – the audience – are invited to dance with us in your seats.

Niv Sheinfeld and Oren Laor have been creating together since 2004. In their works they combine elements and practices from contemporary dance, physical theatre and performance art. They are regularly invited to present their works in leading festivals and theatres in Israel and abroad, as well as teach and create works for dance academies and companies around the world. Sheinfeld and Laor are the Landau Award recipients for 2020.

Niv Sheinfeld danced with Liat Dror & Nir Ben-Gal Dance Company for five years. As an independent choreographer, he created works for Batsheva Ensemble, Kibbutz Contemporary Dance Company, and others. He was the recipient of the Ministry of Culture award for young dance artist (2007) and the Rosenblum Award for performing arts (2009). Oren Laor studied in the theatre department at Tel Aviv University and worked with acclaimed directors such as Yvgeny Arye, Nola Chilton and Edna Shavit. Laor teaches performance and techniques in physical theatre.