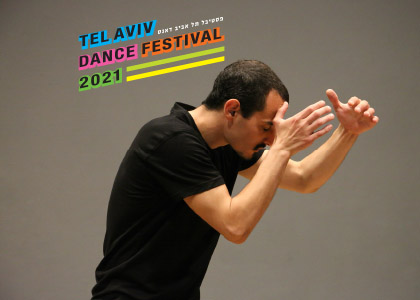 Developed during the Covid-19 pandemic, Ausencia is a solo performance which deals with the body and its absence, the possibility of touch, and the lack of such possibility. Between longing and frustration, dancer Ariel Gelbart acts and moves in the empty space as he communicates with things we cannot see. During the process Gelbart physically interacted with concrete objects of references and responded to them. These objects were then removed, thus depriving his movements of their functionality while revealing what remains when the motivation for the movement is eliminated and the focus shifts to the negative space of the movement itself. The audience witnesses the body of the dancer being influenced and moved, without seeing the source of his actions, allowing different interpretations and questions regarding one’s drive to arrive. The work reintroduces the sense of physical deprivation forced upon us by the pandemic.

May Zarhy creates stage pieces, participatory and site specific works. She is drawn to the intersection of choreography, performance, and sound art. In her works, she explores the materiality of the human body through movement and sound. She is a graduate of the Rotterdam Dance Academy, and Xavier Le Roy and Mathilde Monnier’s ex.e.r.ce post-graduate program, in Montpellier, France. During her studies, she worked as William Forsythe’s assistant at the Forsythe Company. She is a founding member of the collective "Mamaza” with Ioannis Mandafounis and Fabrice Mazliah. The trio was associate artists at deSingel, Antwerp (2011-2012), and resident artists at Künstlerhaus Mousonturm, Frankfurt (2012-2014). In October 2021 May will begin directing the bi-annual program for choreography at Kelim Choreography Center, Bat Yam. She currently teaches at the School of Visual Theater Jerusalem and works as a dramaturg and rehearsal director for fellow artists.

Supported by The Fund for Independent Artists, Ministry of Culture and Sports; and the Center for Contemporary Art Tel-Aviv-Yafo CCA