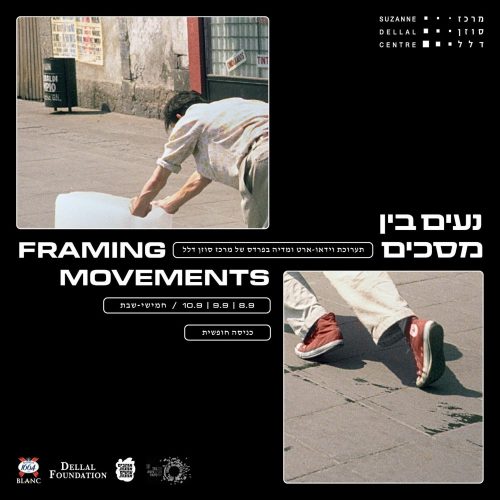 The exhibition ‘Framing Movements’, part of ‘Loving Art, making Art. 2022,’ returns to Suzanne Dellal Centre’s orchard, filling it with video and media works that expand the perception of body, movement and choreography. This year, the exhibition focuses on the concept of movement in its broad social, political and environmental context. The exhibited works present a variety of choreographies dealing with the relationship between man and various geopolitical systems, their encounter with the surrounding uncontrollable and perishing nature, and their own human nature.

Paradox of Praxis 1 (Sometimes making something leads to nothing), 1997 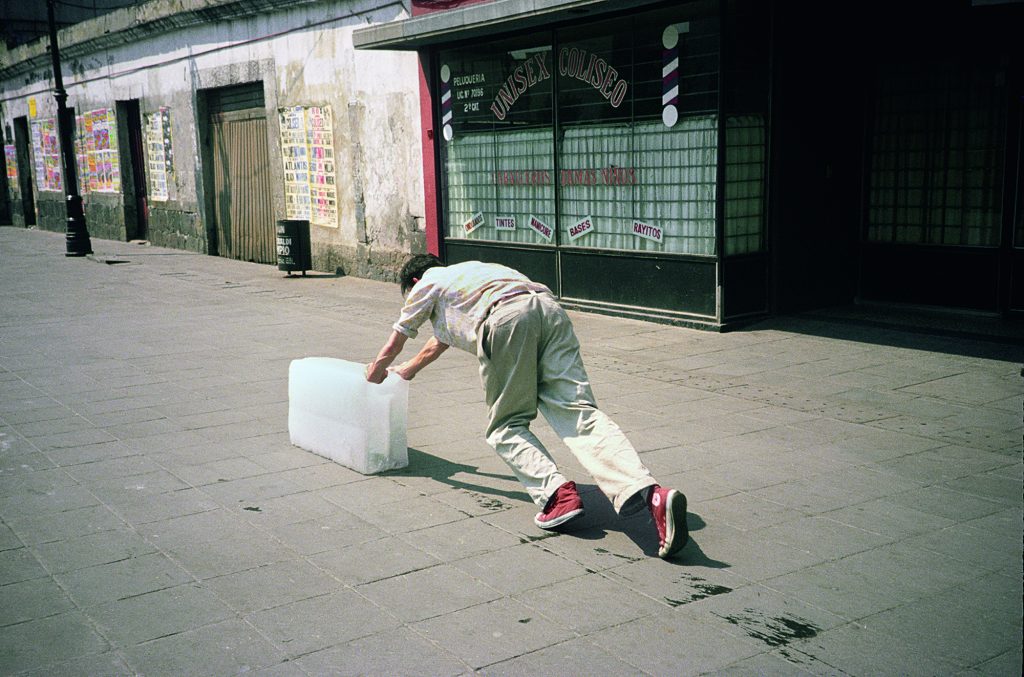 “Paradox of Praxis 1 (Sometimes making something leads to nothing)” (1997) is one of Belgian artist Francis Alÿs’ best-known video and performance works, in which he pushes an ice cube up, down and across the streets of Mexico City. At the end of the video, all that is left of the cube is a small puddle of water, and as such, sometimes movement can lead from “something” to “nothing.” 25 years later, as the absolute totality of the climate catastrophe is felt in every corner of the Earth, viewing the work through this prism seems necessary- a reminder of man’s destructive and ominous actions. 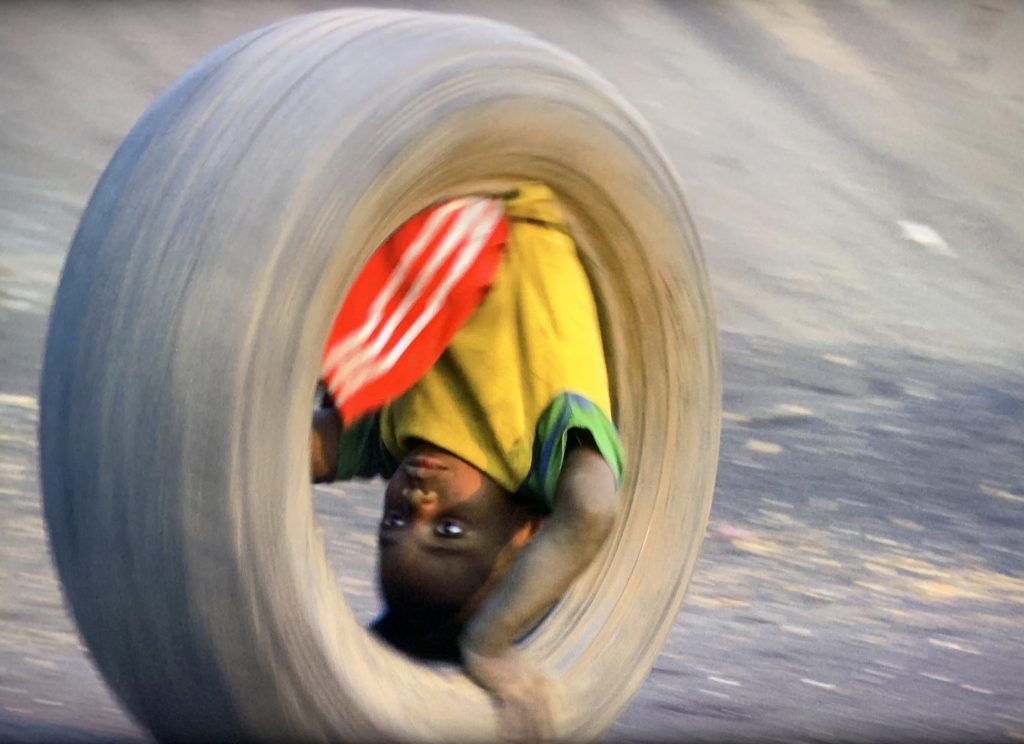 The work, Children’s Game #29: La roue (2021), is central to the Belgian Pavilion exhibition at this year’s Venice Biennale. The piece is part of Alÿs’s long-standing series, in which he films and collects children’s games from around the world. The video shows children pushing a car wheel to the edge of a mound towering over a cobalt mine in the town of Lubumbashi in DR Congo, where many risk their lives to satisfy the global hunger for lithium batteries. The game is the children’s response to the post-industrial crisis. Couched in extreme anxiety about the future, this work inspires a glimmer of hope and resistance as the children roll gleefully down the hill.

“Children’s Game #29: La roue” was made in collaboration with Rafael Ortega, Julien Devaux, and Félix Blume.

Throughout his practice, Francis Alÿs (1959, Antwerp) consistently directs his distinct poetic and imaginative sensibility toward anthropological and geopolitical concerns centered around observations of and engagements with everyday life, which he described as “a sort of discursive argument composed of episodes, metaphors, or parables. His works are presented and are found in collections of the art world’s most renowned institutions. In 2022, he represented Belgium in the Venice Biennale. 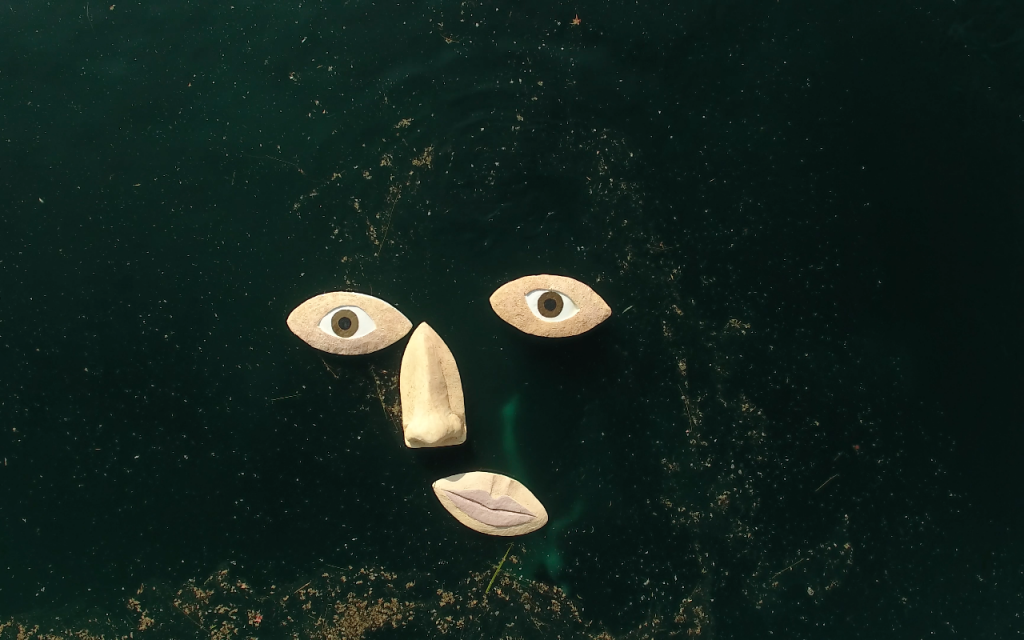 Four boats evoking the parts of a face (two eyes, a nose and a mouth) approach and come away from one another buoyed by the movement of the waves and wind on the lake water’s surface. The artist, Javier González Pesce, swims to them, attempting to hold the boats together in the correct order. The water’s move pushes the pieces together and pulls them apart over and again. The Sisyphean task in Human Face (2019) elicits the nature of man and his desperate attempt to enforce order on a chaotic world that tears apart our logical structures with every wave that comes and goes.

González Pesce is a visual artist and independent curator who lives and works in Santiago, Chile. He holds a BFA in sculpture from ARCIS University (2008) and studied at Diego Portales University. He has exhibited his work mainly in Chile, China and Switzerland and in group shows in Argentina, the US, Greece, Uruguay and Colombia. He was nominated for the Altazor Awards in the category Sculpture (2012) and won the first Price at the Young Art Contest of the Visual Arts Museum and Minera Escondida (2012). Since 2011, González Pesce co-directs the alternative exhibition space LOCAL Contemporary Art. 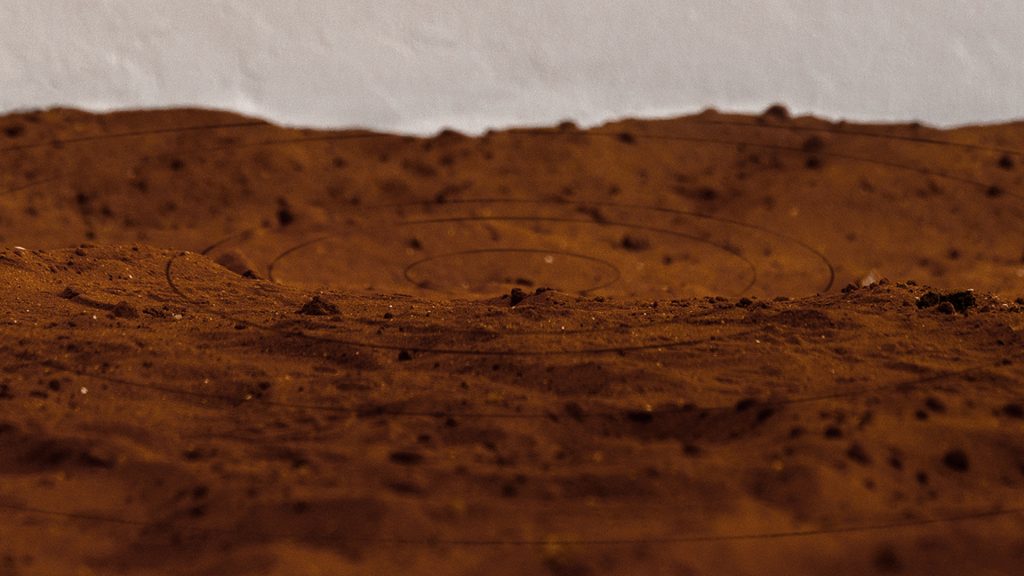 Tamoon is a sound platform that takes place in natural and urban spaces that explores the act of planting speakers underneath the earth. The speakers create an underground spatial sound grid that generates sounds, noise, and vibrations.

The burial area in Suzanne Dellal invites people to move, sit or lie down, bring their organs closer to the ground, feel it and listen to it.

The piece was created during a residency in Shdemama, presented at the Loving Art Making Art Festival, and supported by the Israeli Lottery.

Daniel Grossman is an artist currently living and working in the UK. In his work he seeks to explore the transformational sensibilities of sound through sounding and non-sounding media. He composes, designs, codes, performs, and teaches. His works were performed and exhibited in venues such as Suzanne Dellal (IL), Scheltema (NL), Barbican Centre (UK), SOTA(SG), The Marrakech Biennale (MA), And the Israel Museum (IL). 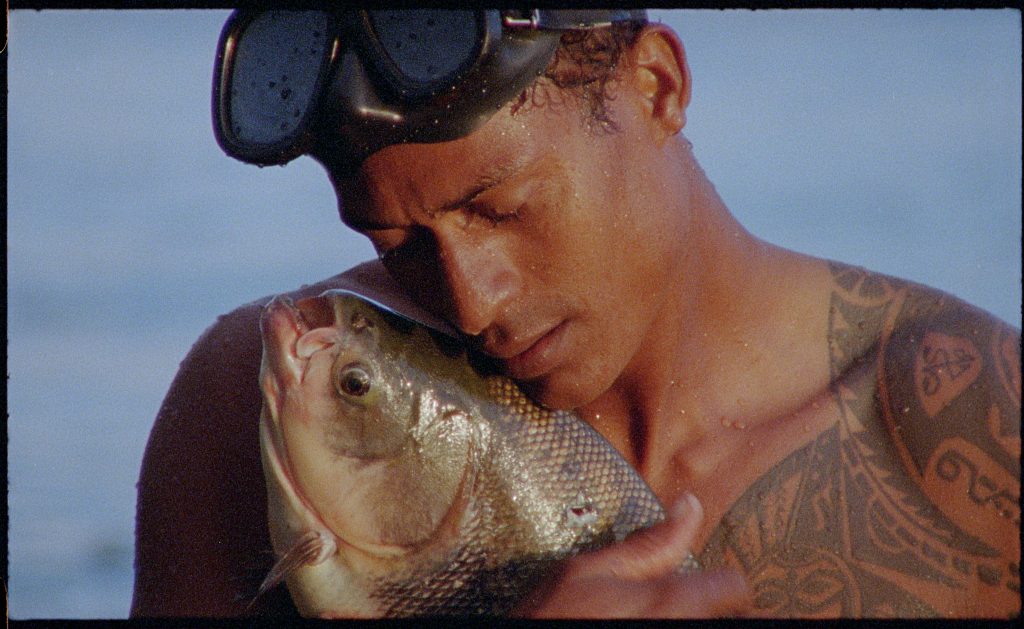 “O Peixe” (2016) is a film by Brazilian artist Jonathas de Andrade (1982, Alagoas), which follows local fishermen by the São Francisco River on the Northeastern shore of Brazil. After catching a fish, the fishermen hold the fish in their arms, embracing the fish until it takes its last breath. This custom emphasizes the ritualistic and circular choreography of life and death, delicacy and control, and illuminates the complex relationship between man, his surroundings and the animals he shares the Earth with.

Desvia | Wexner Center for the Arts 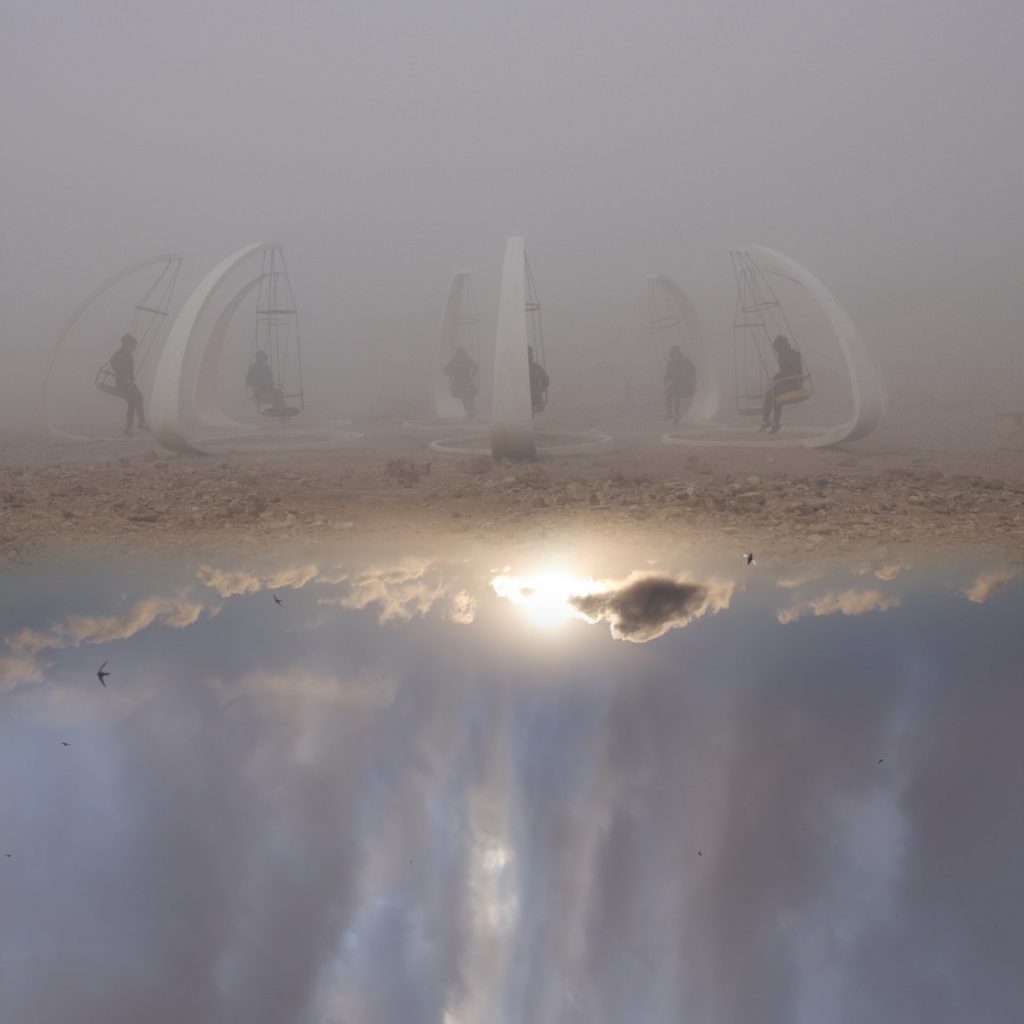 Video artist Hinda Weiss intertwines places, moments, and times into digital-spatial compositions. In “After the Desert Goat” (2016), Weiss composes desert scenes in a slow, circular scroll — swing-sets on a cloud-top move toward a vertical valley that breaks on a horizontal mountain range. In between, ibexes move and a single human figure walks between the desert rocks. Like a scroll, the space spreads simultaneously back and forth and up and down, continuous and ongoing. Creation and destruction, hope and despair, swirl and bind together.

Hinda Weiss (1980, Cleveland, Ohio) is a photographer and video artist with a BFA from HaMidrasha Faculty of the Arts and an MFA from Columbia University. Her works have been exhibited in numerous solo and group exhibitions worldwide. Weiss has participated in artist residency programs such as Artport (Tel Aviv), Basis (Frankfurt), MeetFactory (Prague), and EFA (New York). She won several awards, such as the Ministry of Culture’s Young Artist Award and the Outset Contemporary Art Fund Young International Artist Award, and received scholarships and grants from the Ostrovsky Family Foundation, the Artis exhibition fund, and more. Her works can be found in public and private collections, including the Israel Museum, the Tel Aviv Museum, the Herzliya Museum, the Haaretz Art Collection, the Shpilman photography collection, and others. 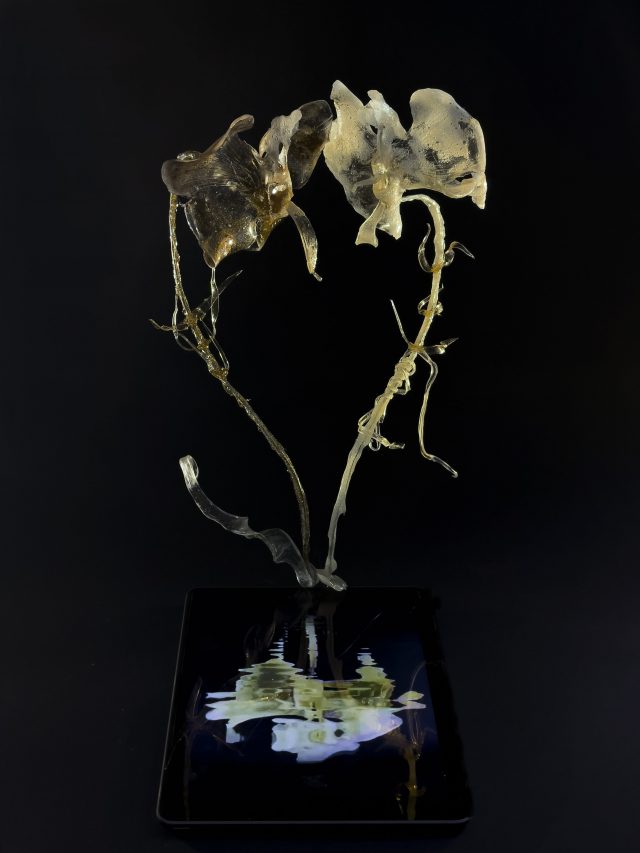 “Narkao” (2022) is part of the body of work “Emergence,” which artist Annabel Paran has been developing over the past year and seeks to expand an intermediate range between binary categories of natural-artificial, living-dead, and real-imagined. Within the project’s framework, Paran sculpts bio-plastic materials, which she concocts from plant sources and animal bones. Through a combination of sculptures, projections, movement and sound, Paran creates science-fictional installation worlds through which she raises questions about the relationship between the human body, the natural world, technology, and experiences of destruction and spiritual union.

Annabel Paran (1991, Jerusalem) is a multidisciplinary artist and performer. She creates in a realm between sculpture, dance, text, and video. In 2020, Paran graduated with honors from Pratt Institute’s Department of Sculpture in New York and has since exhibited works in New York, Berlin, Jerusalem, and Tel Aviv. In addition to her individual work, Annabel is a member of several art collectives, including The Moving Company (New York), Investigative Operatics (New York/Toronto), and Empty House (Jerusalem). 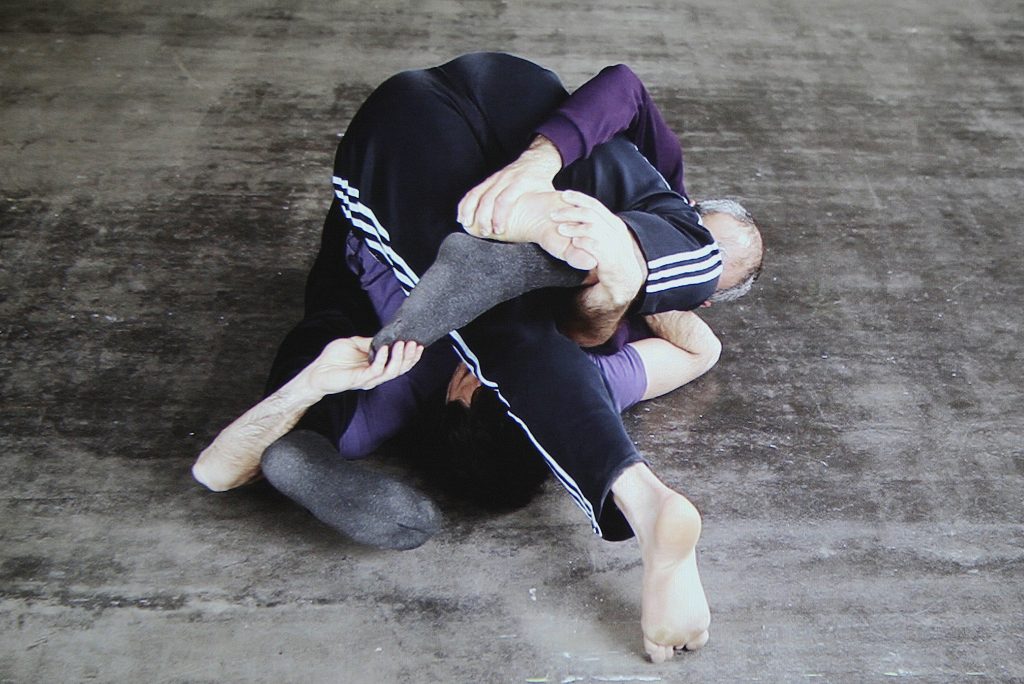 The work “Stellentstellen” (2013) by choreographer William Forsythe features choreography in which the dancers Ander Zabala and Amancio Gonzalez combine their bodies into a knotted constellation. With this work, an event is offered that subtracts common elements typically associated with choreography: the structural development of time and space and the visual isolation of parts. This slow-motion physical and optical puzzle in real time, which Forsythe calls an “entanglement” is a hybrid of choreography, film, and sculpture.

Courtesy of the artist

In cooperation with the Museum für Moderne Kunst MMK, Frankfurt

William Forsythe (1949) has been active in the field of choreography for over 50 years. His work is acknowledged for reorienting the practice of ballet from its identification with classical repertoire to a dynamic 21st century art form. Forsythe danced with the Joffrey Ballet and later the Stuttgart Ballet, where he was appointed Resident Choreographer in 1976. In 1984, he began a 20-year tenure as director of the Ballet Frankfurt after which he founded and directed The Forsythe Company until 2015.Forsythe’s deep interest in the fundamental principles of organization has led him to produce a wide range of projects including Installations, Films, and web-based knowledge creation. While his work for the stage resides in the repertoire of ensembles worldwide, his installations are presented internationally in exhibitions and museums. 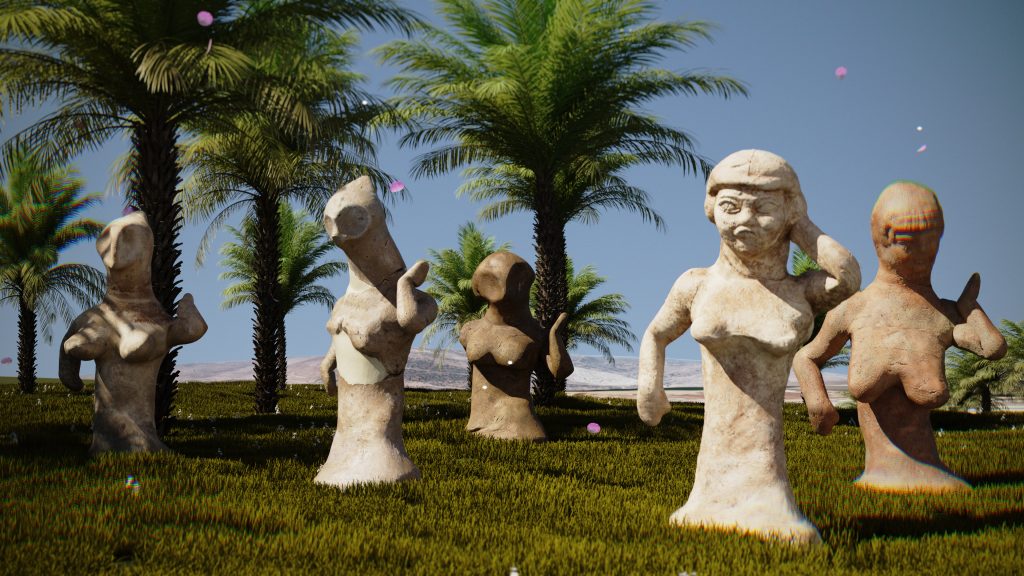 In her new video work “Zehava1” (2022), Ruth Patir (1984, New York) creates a magical space in which archaeological artifacts are animated and come to life. In a landscape that appears to be a green kibbutz lawn in the heart of the desert, five Canaanite fertility figurines, estimated to date back to the Second Temple era sway and dance to “The Lilac Flower” by Chava Alberstein. Using 3D technology, Patir brings together physical and historical movement. In this setting, the Zionist dream and Canaanite past come together and butt heads in a disturbing and humorous film that is as far-fetched as a green Swiss lawn in the heart of the desert.

“Zehava1” is a collaboration with “Gila,” a school and dance company for elderly women, directed by choreographer Galit Liss. The figurines’ movements in Patir’s work are triggered by the movements of dancer Zehava Noy-Meir.

Ruth Patir (1984, New York) Works with video, new media, and performance on continuums ranging from the personal to the public. In her works, Patir rethinks historical narratives and gender paradigms and examines the aesthetics of power. In 2018, she won the Ministry of Culture’s Young Video Artist Award and graduated from the Arison Foundation’s “Artport” residency program (2019-2020). Her works have been exhibited at the CCA – Tel-Aviv Center for Contemporary Art, MoMA – The Museum of Modern Art in New York, Petach Tikva Museum of Art,  Anthology Film Archives (NY), Line 16 urban gallery (TA), and the Flux Factory Collective (NY). Patir holds a BFA from the Bezalel Academy of Art and Design (2011) and an MFA from Columbia University in New York (2015). 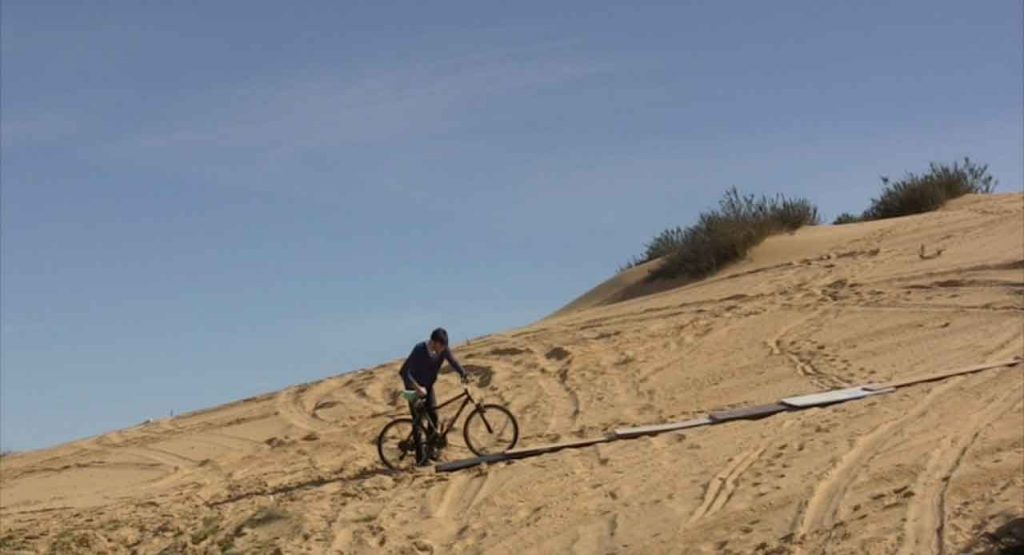 In “Crossing the Dune,” Elham Rokni‘s (1980, Tehran) 2010 video work, we see a cyclist crossing a dune by laying down a series of wooden planks, which create a barrier between the bicycle’s wheels and the scattering sand. The uncompromising Sisyphean task is reminiscent of man’s futile and stubborn attempt to adapt natural conditions to his needs rather than the other way around. As such, the piece raises questions about accessibility and movement. 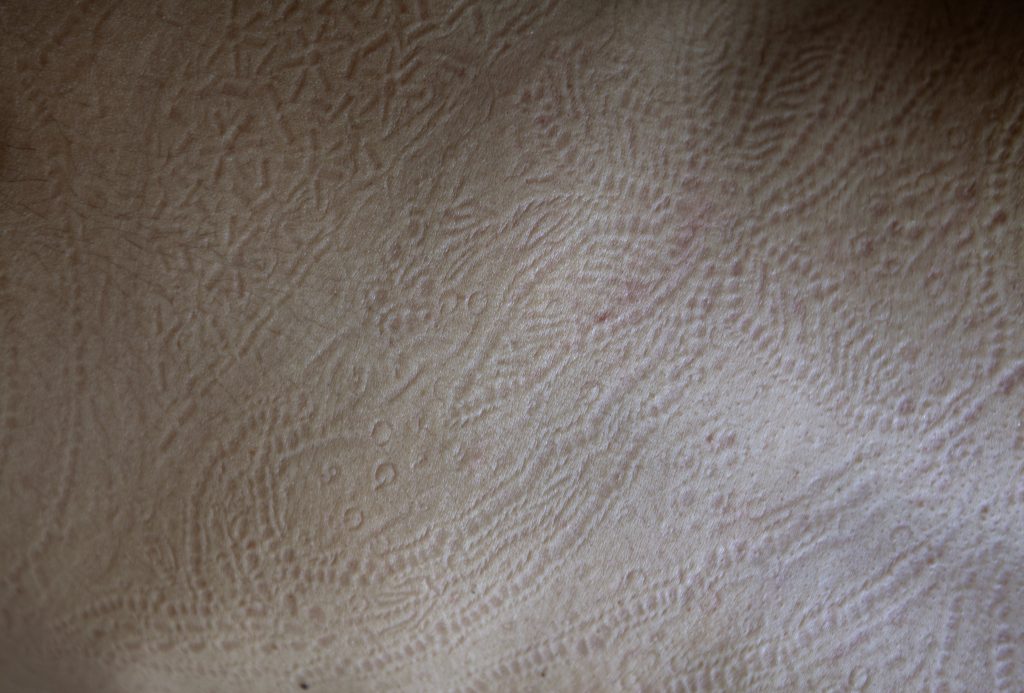 Presented alongside, the work “45 Minutes” (2010) focuses on pressure marks on the body. The impressions, which call to mind the incredible aesthetic, cultural traditional rugs of Iran, are translated in this work to baggage physically infiltrated into the body that, like memory itself, fades over time. When presented side by side, the desert landscape and the human body come to resemble one another. As such, the pressure marks on the body resemble the footprints in the sands of the desert, both of which will slowly be erased in time.

Elham Rokni (1980, Tehran) is an artist working mainly in painting and video. She graduated from Bezalel Academy of Art and Design and has been a lecturer there since 2013. Her childhood in Tehran and immigration to Israel in the late 1980s are central to her work, where she often builds and breaks down personal memories in an attempt to connect them to burning political and ethical questions around issues of migration, refugees, movement, and accessibility.